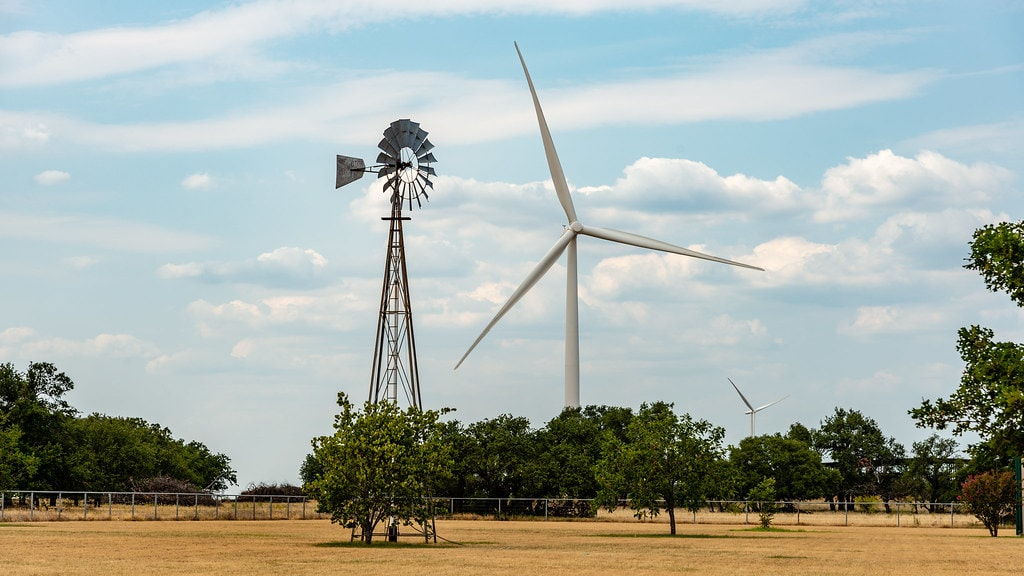 With the growing popularity of alternative energy, you have probably heard the term “wind energy” (or “winergy”) before. However, not all sources of wind-derived power are the same. Two common sources of wind power are windmills and wind turbines. They are both forms of kinetic energy, which is essentially anything that moves. Although both are wind energy technologies, they have a number of key differences, starting with their anatomy. Turbines only produce electrical power from wind, while mills also produce power from water. Turbines and mills are used alone or in large-scale wind farms to produce electricity.

In comparison to the turbine, windmills are much smaller. Dating back to the 1300s, they are also a much older form of wind technology. Using strong blades attached to a sturdy base, they’re designed to pump water and grind grain. When the wind blows, the blades catch the air and start to turn. The blades are attached to an axle, which in turn is connected to either a pump or gears. Earlier mills were made mostly of wood, which provided durability and protected them against damage in strong winds. In the 1800s, they were a primary source of energy for steam trains and working farms. They were also used to power paper mills, saw timber, and process crops like cocoa, spices, and tobacco. Since the 1970s, newer versions have largely replaced wooden models in the United States. Newer models have steel blades and automated mechanical components. They are sometimes used in large-scale commercial farming and crop production operations. Today, nearly six million mills help supply American wind energy.

Turbines are a much newer form of wind-powered technology. In contrast to the windmill, the turbine is only seen as a standalone unit when smaller amounts of wind energy are required. It’s more common to see groups providing power in small wind farms and large-scale multi-megawatt wind farms. As demand for clean energy and wind resources grows, it’s increasingly common to see a wind farm on ridges, open pastures, and plains, and even in offshore wind farms in the ocean. Modern wind turbines are generally much more technical than mills. They are similar in the sense that they have large blades attached to the base. Inside the turbine is a gearbox and a generator. Most people are familiar with the horizontal-axis turbine, which has a few longer blades that look like an airplane propeller. However, a lesser-known variety is the vertical-axis turbine, which has shorter and wider blades.

How Much Power Does Wind Energy Produce?

Today, the average small windmill can produce anywhere from one kilowatt (kW) to 25 kW of power. Larger machines, however, can produce anywhere from 50 kW up to 600 kW. They are sometimes used along with modern wind turbines in wind power plants to produce large-scale wind-powered energy. As a whole, wind turbines are a much more powerful source of electricity. A single structure can produce up to 100 kW of energy, which is sufficient to provide a home or small office with power. The biggest wind turbines, often used in wind plants, can provide up to 9.5 MW of power. Over the past 10 years, the Department of Energy notes that the total wind capacity in the United States has increased by about 30% each year. Now, it is one of the biggest sources of renewable energy in the country. According to the National Renewable Energy Laboratory, it’s also becoming more affordable.

Winergy is one of the most popular and promising forms of renewable energy technology. With the capacity to power homes and supply commercial enterprises with power, there are many possibilities with these energy sources. Now when someone asks what the difference is between a windmill and a modern wind turbine, you’ll know the answer.