Wind turbines come in many shapes and sizes. Wind turbine blade designs are equally varied. Turbines are designed with either a horizontal or a vertical axis. Their blades are flat, rounded, or curved. In generating electricity, a horizontal-axis turbine with a three-blade design is most efficient for energy production. However, other turbine and blade shapes may be better designed for production and durability in certain environmental conditions. 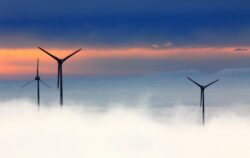 Flat blades are the oldest design used in turbines. Although they are now used in wind energy production, they have historically been used to power windmills for years. Flat blades have a broad shape that catches the wind’s energy to facilitate rotation. These blades are also referred to as “drag-based” blades. They generally rotate slowly and therefore don’t produce as much energy as other blade types, but they are the simplest to build and use.

Curved blades have a broad, flat base and a curved design at the top. They are generally more useful for energy production. Air moves faster over the blade’s curved side than the flat side, which in turn increases the blade’s rotational speed. Curved blades can turn quickly, which also increases energy production potential. These blades are the most energy-efficient of the three-blade designs. Curved blades must have an aerodynamic design to work most efficiently.

Additionally, the length of the blade is essential for capturing the most power. Several specific curved blade designs have developed over time, including propeller-type blades and twisted blades. Propeller blades, which are also called “twisted” blades, are built with speed and efficiency in mind. They are also relatively strong and lightweight, which makes them more effective in areas with higher wind speeds and require sturdy equipment that can stand up to higher gusts and sustained speeds.

Along with different kinds of blades, there are also various designs for turbines. There are currently two primary designs in use: horizontal-axis wind turbines, HAWTs, and vertical-axis wind turbines, which are called VAWTs. Horizontal-axis turbines are the most popular and familiar design. They are usually constructed with several long blades that resemble an airplane’s propellers.

These turbines can have two or three blades depending on the size of the unit. The blades are positioned to face the wind, which allows them to capture the most amount of energy. Vertical-axis turbines have shorter and broader blade designs in comparison. Although turbine and blade design are essential factors in how much energy the system generates, turbines are also placed on towers depending on their size and geographic location, which also plays a role in how much energy the unit produces.

Contact us for more information on the wind turbine and blade design.